So perhaps not so wisely, I have volunteered to talk about my research on Sheffield's LGBT history in front of an audience! Eek!

It is in my capacity as a member of the Sheffield Hallam University Staff Forum, and part of a joint event we are running for LGBT History month. Here are the details, I hope to see you there!

Ok, so this isn't strictly to do with Sheffield's gay history, but it caught my eye and thought it was worth a look at. 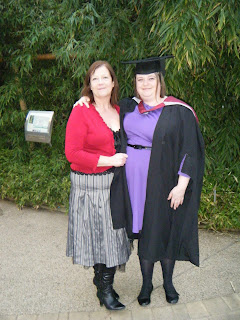 Here I am in the cap and gown with my very proud Mum!
As I have been so busy lately, I don't have much to report on the Gay history project, but today I have created a Facebook group for it. Find it here http://www.facebook.com/profile.php?id=1239631301&ref=pymk#!/groups/306596282709747/
I am also planning a small event at Sheffield Hallam University to disseminate what I found during my inital research. This will be some time in February, so watch this space for more updates.
Lastly I want to metion that 2012 is Alan Turing Year! For those who are unaware, Alan Turing was a gay mathematician who, during World War Two was placed at the top secret Bletchley Park to work on cracking the now infamous Enigma Code. He was highly successful there and is credited by many as having changed the course of the Second World War (for the better, of course).
After the war, his work still highly secret, Turing went to Manchester to work as an academic. It was there that he was reported for being a Homosexual. For men to have sexual contact with other men at this time was still illegal, and Turing was found guilty and given the opportunity to undergo 'corrective' treatment instead of prison. This treatment consisted of taking various male hormones, thought at the time to reverse the desire for Homosexual behaviour. It was also known as chemical castration and was highly unpleasant for the 'patient' both mentally and physically to go through. By 1954 Alan Turing had been rejected by the establishment, considered a threat to National security and committed suicide on 7th June of that year. 2012 marks the 100th year since Turing's birth. Many organisations have decided to mark the occasion by running lectures and exhibitions in his honour. You can find out more about this here http://www.mathcomp.leeds.ac.uk/turing2012/ and follow updates on Twitter here https://twitter.com/#!/Turing100in2012 and here https://twitter.com/#!/AlanTuringYear
Posted by Sandra at 07:42 No comments:

On Wednesday 18th October my partner Claire and I attended the Friends of Edward Carpenter launch event at The Crucible Theatre. The Friends of Edward Carpenter project is being managed by a voluntary committee, aiming to raise enough funds to erect a monument to Edward Carpenter in Sheffield by 2013.
I got to have a chat with the lovely staff from the Sheffield Archives service about my dissertation, and to see some of the Carpenter artefacts on display. Amongst the speakers at the event was BBC Sheffield’s Rony Robinson, discussing his personal connections with Carpenter’s legacy and how he was almost given a memorial in the 1980s. We were also treated to two numbers from local songsmith and folk artist Grace Petrie.
For anyone who doesn’t know about him, Edward Carpenter was an influential writer who pushed for gay rights (as well as other liberal ideas) at a time when it was very dangerous to do so. He lived near Sheffield at Millthorpe from the early 1880s until his death in 1929 with his partner George Merrill. In 1908 he wrote of same sex love in his book The Intermediate Sex.
Carpenter’s achievements in promoting progressive campaigns and ideas such as Socialism, Feminism, Vegetarianism and even clean air prove him to have been a significant part of Sheffield’s history and certainly Sheffield’s LGBT history.
If you would like to learn more about Edward Carpenter have a look at www.edwardcarpenterforum.org or to arrange a trip to see some of the wonderful artefacts held at the Sheffield Archives go to www.sheffield.gov.uk/libraries/archives-and-local-studies. To find out more on the Friends of Edward Carpenter group and to support their work on achieving a permanent monument to such an important figure go to www.friendsofedwardcarpenter.co.uk
Posted by Sandra at 17:04 No comments:

Well it has been such a long time since my last post, I thought it was about time to get on with it! In my defence I decided to prioritise writing my dissertation over writing about writing my dissertation, and due to this stroke of genius, and having three weeks off work I have finally got it done and even better, I passed! I'm not going to pretend it was done to the best of my abilities, given the timescales and slight 'rabbit in headlights' syndrome which descended upon me during those last weeks, but at least Sheffield's LGBT history has got a place to start.
My intentions now, once I have tidied all of the scattered journal articles and scraps of paper from the spare room, is to pick up from where my dissertation left off and carry on in much the same way. In terms of the blog I will be disseminating much of what I have found during my research (some, in fact most of which never made it to the dissertation) in the form of themed posts and I will hopefully continue to do this as I build upon my research. I also hope that this blog can become a place where people can discuss their stories of Sheffield's LGBT past, and post their own memories.
I have loads to talk about regarding what I have found and other things on the horizon so watch this space as they say!
Posted by Sandra at 05:32 No comments:

As LGBT History month is almost over I thought I would take the opportunity to spread the word about some fantastic events taking place in Sheffield to celebrate.

Apologies that this post hasn't been as much about my MA but rest assured I will have some more updates on that soon!
Posted by Sandra at 08:04 No comments:

welcome to the blog

Welcome to my little blog. As the name suggests I hope to make this blog about and instructive to my forthcoming dissertation on Sheffield's gay history. Let me tell you a bit about me and why I am undertaking this project. I am originally from Beverley, near Hull, and I came to Sheffield in 2000 to study the History of Art, Design and Film at Sheffield Hallam University. In 2007 I joined Out Aloud, Sheffield's only LGBT choir and loved it! It wasn't long before I found myself on the organising committee for the local pride event. There hadn't been a pride event so far in Sheffield, and so working on the event was great, as we had a blank canvas almost to create the event we wanted to see. The first Sheffield Pride was in 2008 (officially called South Yorkshire Pride) and for that I co-ordinated a community tent with workshops and activities, and helped with some fundraising nights along the way. I stayed on the committee for the next event in 2009, again running the community tent and acting as treasurer too. Work on the Pride events was a huge amount of fun, and even more hard work. In September 2009 I started the MA I am currently on now, in History, Local and the Global.

Being involved in the gay community of Sheffield on the Pride Committee way started me thinking about the nature of the gay community here in Sheffield. It has always seemed odd to me that we never have had many gay bars in town, and the ones that we do have are spread out, some of them right out of the city centre. Comparing this to local places such as Leeds and Manchester, where the gay bars are close to one another and seem very close knit, made me wonder about the history of Sheffield's gay community, and how the members of this community interacted with one another in the past. A workshop by the Sheffield Archives staff about Sheffield's gay history made me even more intrigued. There seems to be very little material and evidence of what Sheffield's gay community has been like during the 20th Century. We know of course, of Edward Carpenter who lived near Sheffield with his partner, and are lucky to have so many records of his life and his literary works. However, after Carpenter, came a gap in the records of the local archives. My project aims to fill this gap, and to delve into where people met, who they talked to and had relationships with, how they coped with the prejudice and discrimination of the times and what kept them going.


So if you have memories of living in Sheffield as a gay person, please feel free to share them on the blog, and contact me if you would like to take part in the project.
Posted by Sandra at 16:06 No comments: